Sabriza sedang mencuba-cuba untuk membuat cup cake kebelakangan ini dan telah upload beberapa picture di Facebook. I don’t want to discourage her actually, but hmm… I feel I wanted to show her what a REAL cup cakes look like. Maybe she will get the hint. hehe… :p

Btw Kak Ana, this is made in Kuantan by one of my ex-classmates. This IS cup cakes. 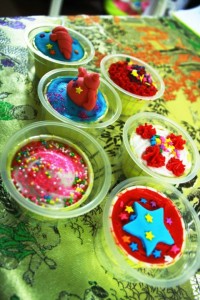 Sebagai moral support, I think I can say this about my sister. I believe she can turn things around. Yes! 😉

Dalam masak-memasak ni, she is indeed a little bit slow. You should see her first dish. I still remember the chicken masak something which does not look or taste like chicken at all. Only Ummar (perut tong sampah) is able to muster enough courage to eat it. Even she herself was a little bit hesitant to eat her own cooking. haha…

What a brother can do, except to encourage his sister la kan. So, Kak Ana (and Ummairah), the above are pictures of a real cup cake.

This site uses Akismet to reduce spam. Learn how your comment data is processed.